Learn how the use of cutting tools started and its evolution.

It all started 10,000 B.C., in the Paleolithic Period, when the first cutting tools were developed by using sharp bones and broken pieces of stone. In the Neolithic Period (from 8000 B.C to 5000 B.C.), also known as the New Stone Age, is the second period of pre-history, and is marked by the development of farming societies. This period is referred to as New Stone Age since the tools started being produced through the polishing of stones and working on the cutting line.

In this sense, it is important to emphasize that the previous period, the Paleolithic, is referred to as the Old Stone Age, since stones were not submitted to this treatment. 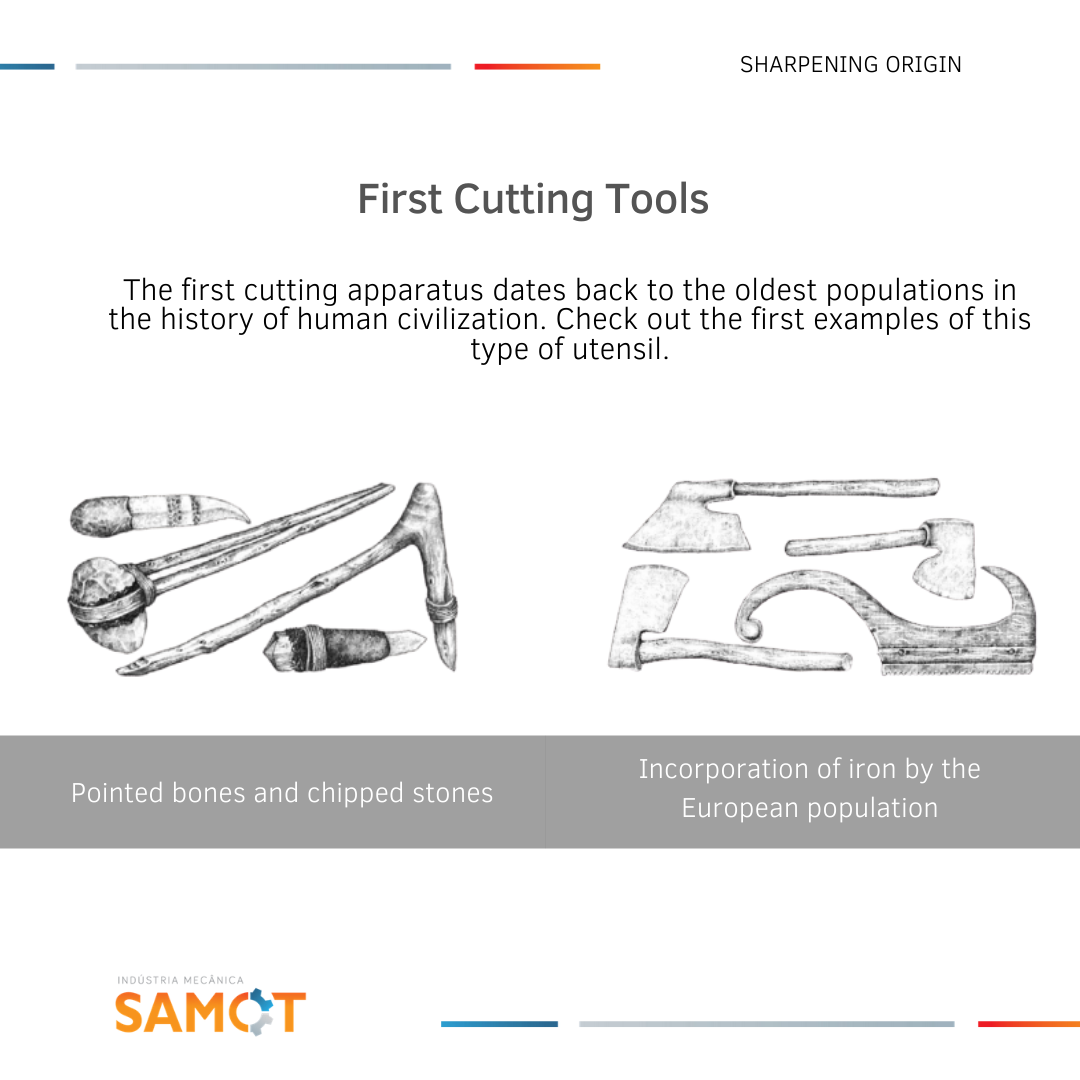 In the Neolithic period, one of the greatest technological advances in tool manufacturing took shape, and the iron melting and treatment technique was greatly improved. Now, this ore is no longer treated through percussion and polishing as the Stone, but through several new features (such as the oven, anvil, bellows and hammer) that have enabled man to produce the very matter from which the tool will be made. It was the embryo of the metallurgical industry we know today.

In 3000 B.C., the Egyptians started using tools such as saws, bow drills and chisels made of bronze. Iron started being used by the Greeks, the Romans and the Nordic peoples of Europe to produce household tools, houses and ships.

Despite the great progress regarding the construction of those tools, the work, developed by the important figure of the blacksmith, was still extremely manual and used both human force and animal motor. It was only in 1769, when brilliant British engineer James Watt revolutionized the general industry by improving the existing steam engines of the time. From Watt’s modifications, steam engines started to move the first trains, boats, factories, as well as forgeries and coal mines, and in that way, set the base for the Industrial Revolution. That great invention would forever transform the way the factories produced and sharpened their cutting tools.

The tools started to be powered by engines, whether steam, liquid fuel, or electricity. That made it possible to have simultaneous operation of several hammers, drills and scrapers, a level of automation that was previously impossible. In addition, there was an immeasurable increase of speed, precision of movements, and operating time of machines, essential factors for the evolution of the metallurgy industry.

Samot excels for having a high level of technology and several types of machinery in its manufacturing plant to build and sharpen its proprietary tools. Its tooling contributes in the optimization of its machining processes, from a technical team dedicated to designing, building and sharpening tools as necessary.

Furthermore, we offer a full structure for the manufacturing of tools, delivering greater agility for the development of new projects and greater competitiveness through the reduction of costs in our manufacturing processes. 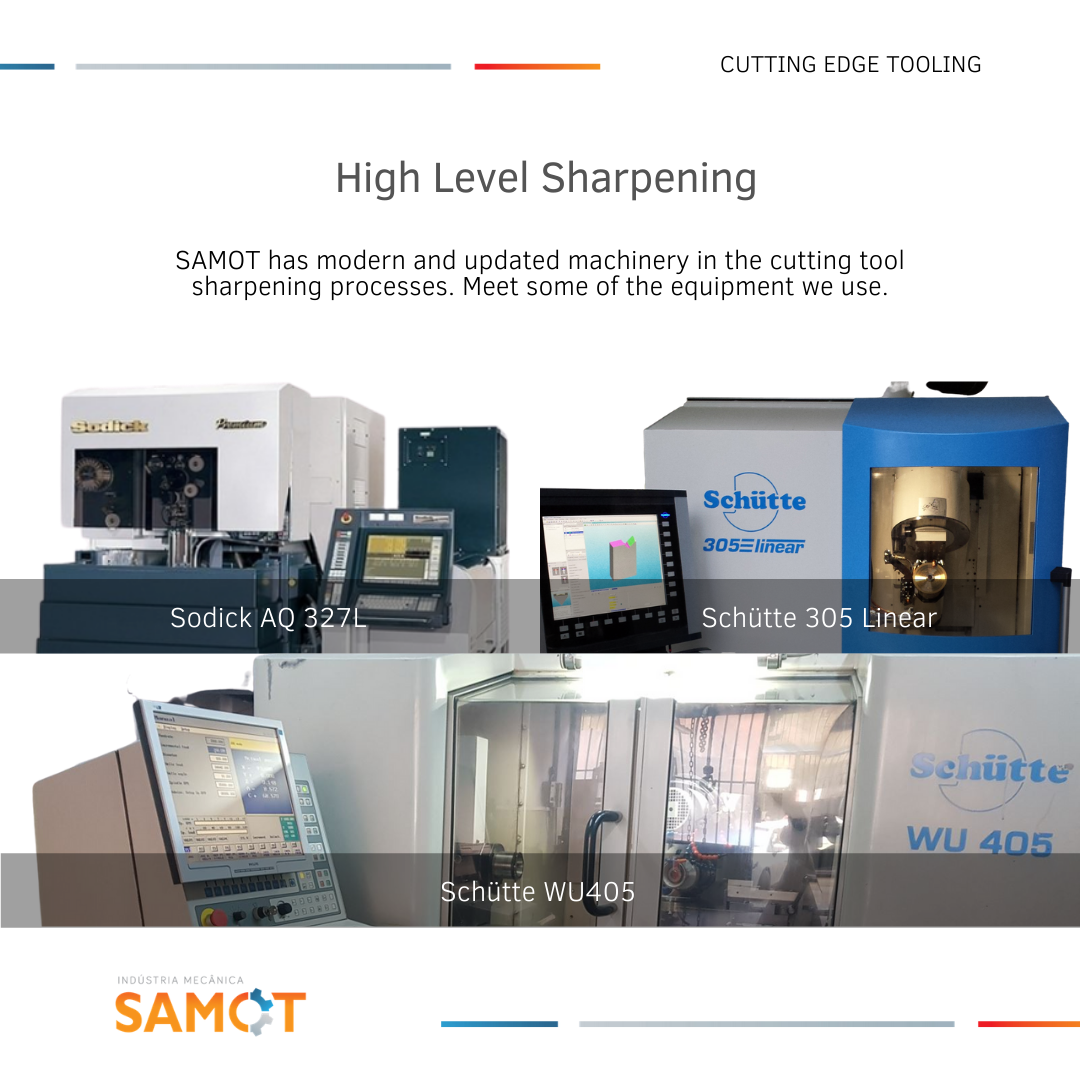 The process of Re-sharpening can be repeated several times, allowing a single tool to be used for a long time with the same precision of a new device. In this process, coating can be also applied, if necessary. Coating improves the performance of the tool, providing productivity gains and extending its useful life. Advantages of the sharpening department in Samot corporation:

Fabrication with own know-how.

Agility in delivering on time.

Fabrication and re-sharpening of tools in production.

Check below all the stages of this development. 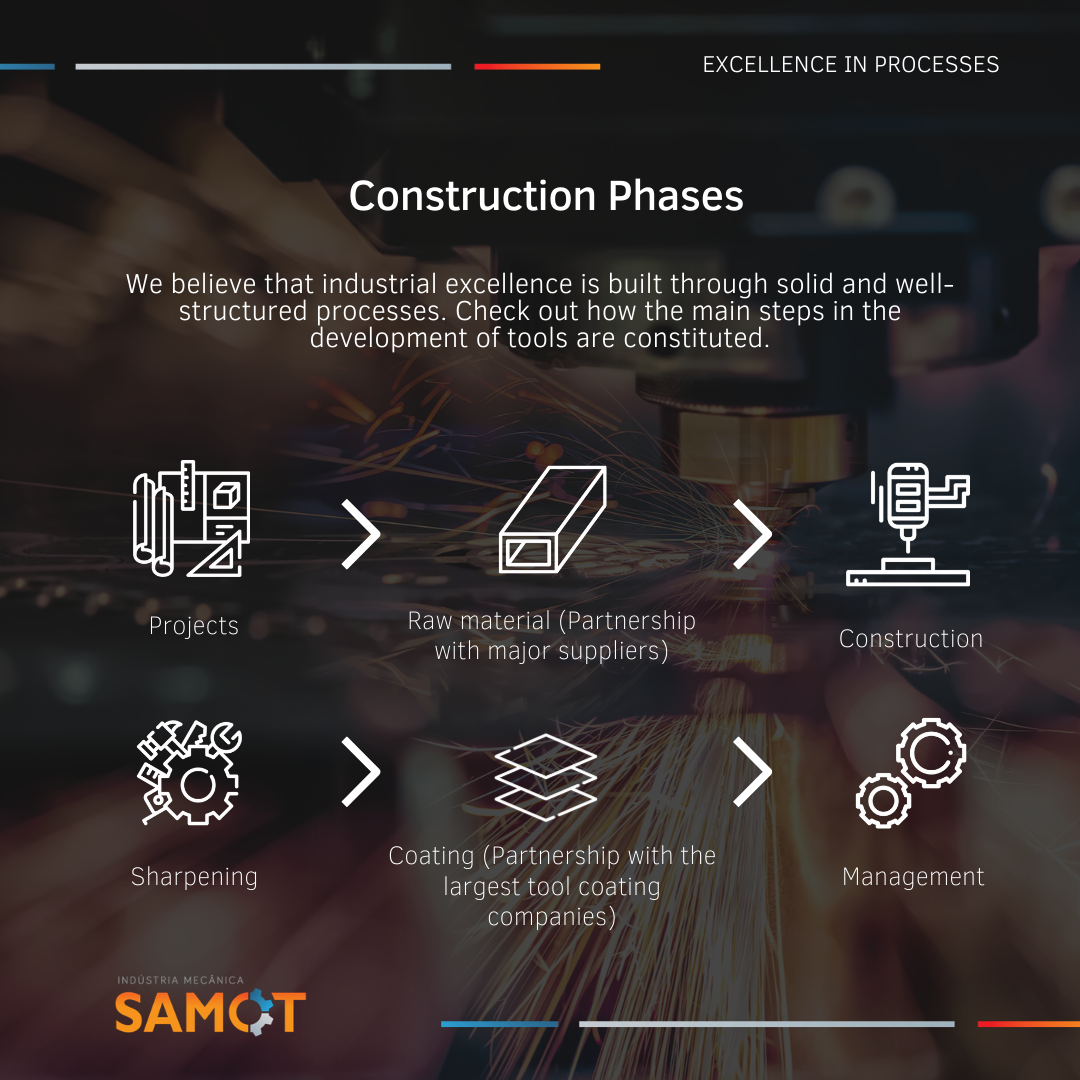 It is for these and many other reasons that Samot is considered a reference in this industry by many manufacturers. Always seeking new and better practices, we have quality, agility, and efficiency as requirements in all our deliveries, making these characteristics also reflect on all our internal processes.