THE USMCA AGREEMENT AND THE LOCALIZATION OF SUPPLY CHAIN

In North America, the automotive industry has a long history of almost 120 years, and at the beginning of all, this production was dedicated only to the domestic market of each country due to impediments to trade barriers. In 1965, the course began to change through the US-Canada Automobile Parts Pact, which eliminated tariffs on vehicles and parts. For Mexico, this liberalization of trade policies began in 1980. The most visible example was the permission to use Mexican labor for components used by US automakers.

With this merger of the three economies, in 1994 the North American Free Trade Agreement (“NAFTA”) was adopted, which was gradually introduced and which in its 25 years of history had almost “erased” the borders for North American producers. By looking at a map of an OEM manufacturer for example, it is possible to check the location of suppliers spread across the three countries. 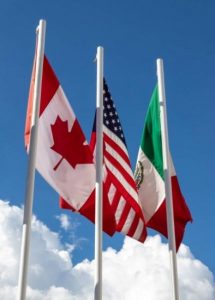 This event had some results also in the final production of vehicles, with an increase in manufacturing in Mexico and Canada and, consequently, a decrease in the percentage of the USA in this comparison scenario within North America.

But since July 2020 a new trade agreement that replaces the old NAFTA has been signed, the United States – Mexico – Canada Agreement (“USMCA”) is in effect. Aiming to reduce imports from countries outside the group, which strengthened regional value chains and repositioned Mexico in the US global strategy to contain China.

This deal encourages United States manufacturing and regional economic growth by requiring that 75% of auto content be made in North America. The rules will:

• Help to incentivize up to billions annually

• Help to preserve and re-shore vehicle and parts production in the United States.

• Close gaps in the current NAFTA agreement that incentivized low wages in automobile and parts production.

In addition, the agreement seeks to reinforce Mexico’s labor rules, which are contained in the 1917 Constitution but which have not been fully implemented. The USMCA is also expected to assist in the economic recovery in North America after the crisis triggered by covid-19. In the words of US Assistant Undersecretary for International Trade Joseph Semsar: “We believe the USMCA will ensure that North America remains the world economic power and that the agreement will create well-paying jobs for Americans, Canadians and Mexicans.”

This localization of supply chain from Asia to North America has several positives, such as having access to parts and technical assistance locally, a much better lead time, ease of stocking possibilities and much more. SAMOT has a plant in Guanajuato, Mexico, and can be that local partner, with manufacturing capacity to serve various segments such as light and heavy automobiles, agricultural industry, components for oil and gas, renewable energy, among others. After all, if the USMCA came to keep the three strongest countries together, pursuing business relationships with companies that are closer geographically is the need and the solution at the moment for North America.