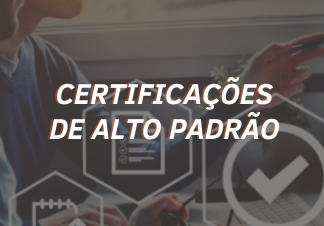 Certification is a set of activities developed by an independent organization that has no commercial relationships. Its purpose to publicly confirm, in written, that a certain product or process is in compliance with the requirements specified, for example, to applicable rules. When a company is certified by a third-party organization, such organization grants it a seal of approval, as proof of the credibility of its management, helping ensure that the potential client trusts the products/services acquired.

Based on this concept, after the Second Industrial Revolution, representatives of 25 countries gathered in London in 1946, with the purpose of creating an international organization focused on standardization and having as goals the “coordination and unification of industrial standards”.Then, in February 23, 1947 they founded the International Organization for Standardization (ISO), and its acronym derives from the Greek word isos, which means “equal”. Currently, this non-governmental organization represents countries that respond for 95% of the worldwide GDP.

For Marshall Jr. (2001), the goal of ISO is to promote and ensure the development of standardization of correlated activities, to allow economic, scientific and technological exchange in levels that are more accessible for organizations.

As an example, during the progresses in the automobile industry, a need for standardization was seen, and in the late 1980s the QS-9000 norm arose in the United States, and other norms were implemented in Europe and Asia in parallel (VDA6.1 / EAQF / ASQ). Then, ISO, along with the International Automotive Task Force (IATF), launched the ISO/TS 16949 in 1999, with a second edition in 2002, where the requirements were unified for standardization of processes throughout the world.

Therefore, as one can see, the norms were created to respond to a need in the global market, because, through a request from production or from stakeholders such as consumers, global experts gather and develop and/or review a norm, considering aspects from the scope, definitions and key content with an approach based on risk analysis and consensus. In other words: comments from all parties are considered during this multi-stakeholder process (technical committees comprised of authorities from the relevant industry and from consumer associations, universities, NGOs and government).

Since July 1996, SAMOT has been certified with ISO 9001 and, in January 2010, it implemented the environmental management system. Concerning IATF, the first certification was through QS 9000 and, as the norm was revised, it became certified with the IATF 16949:2016, in October 2018.

Therefore, throughout its path SAMOT has understood the benefits for following a quality/environmental management system and, based on this, it went through again the recertification process in July 2021, in the following norms:

ISO 9001: It is the Quality Management System. Focused on ensuring that the business provides a consistent level of quality to its clients, offering processes and procedures that are clearly defined and regularly reviewed.

IATF 16949: It is the Quality Management System focused on the automobile chain. The requirements from this norm currently follow the annex SL as a standard used among the ISO norms, and is comprised of conditions that complement and specialize the premises from ISO 9001.

ISO 14001: It is the Environmental Management System. Its main focus is on reducing costs and reusing resources. The norm forces the company to be aware of and control business aspects that have environmental impact.

In line with the requirement enforced through the automobile segment, which is always pursuing the best deadlines for delivery, standardization, traceability, among many other aspects, SAMOT creates and delivers machined parts with excellence and high-level of quality, aiming at continued improvement and customer satisfaction.